Share a memory
Obituary & Services
Guestbook
Read more about the life story of Christopher and share your memory.

Chris was also a member of Wesley United Methodist Church and the youth choir and youth group.  It was there where he learned the tenets of establishing a faithful prayer life, a tool he would be able to rely upon in much later years when he fell ill.

Chris had a unique ability to make and maintain friends easily, He recruited his neighborhood friends to crossover from the Tiger Cub Troop 35 Pack to Boy Scout Troop 35 when they became age appropriate.  Some of them were "foodie friends" and have remained lifelong friends; among them are Damon Wilson the "Camp Moses Scout Chef", Donald Ullen and Gary Huff the "Try Me Breakfast & Lunch Chefs" and  Terrence Walden at "Chicken & Waffles."

After graduation Chris attended Northern Virginia Community College with plans to transfer to Johnson & Wales University. However fate intervened and Chris was offered a fulltime position at the prestigious Arlington Golf and Country Club, a true dream job.  Over his 20 year tenure there, Chris advanced  as  "Chef" . When his mother fell ill  in Springfield, he returned to offer care and assistance both to her and to nephew Joshua whom his mother helped raise.  While back  in Springfield he continued to hone his culinary skills and briefly worked for  the Sheraton Springfield Food Service Dept.

He met and married Tiffany Pearson and together they raised two sons Semaj and Christopher.  Years later after the marriage had ended Chris met Tierani Pattersonat the Country Club. She became  "the love of his life" . They were married and became a perfect compliment to each other.

Chris is survived by his beloved wife Tierani, his two sons Semaj and Christopher, his devoted mother Valerie King-Jackson, his brother Davin (and wife Alexis), sister Toya, two godchildren Liliana Mitchell and Grayson Yerby, a special niece and nephew Selena King and Joshua King, numerous other extended family members including  great-great-great aunts, uncles, cousins, other relatives and of course his beloved dog MAC and many, many friends.

Christopher bravely endured the rigors and complications of Diabetes for more than 20 years. He has earned his rest. We will gather together to celebrate Chris' life and to commemorate the 18th anniversary of his brother Tremayne's King-Jackson's passing on Sunday, September 25th  at the Fraternal Order of Eagles, #148 (F.O.E.), 530 St. James Ave. from 4-8 p.m.

To send flowers to the family or plant a tree in memory of Christopher "Chris" Jackson, please visit our floral store. 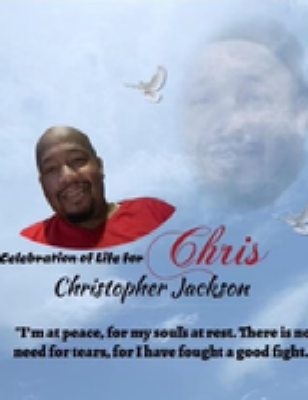 You can still show your support by sending flowers directly to the family, or by planting a memorial tree in the memory of Christopher "Chris" Jackson
SHARE OBITUARY
© 2023 Harrell Funeral Home. All Rights Reserved. Funeral Home website by CFS & TA | Terms of Use | Privacy Policy | Accessibility